Carlos is a good wolf. He is the younger brother of Drake.

Carlos has chestnut fur like Drake but some parts of Carlos' fur are a lighter kind of brown. His hair is a few inches above his yellow eyes.

Carlos is kind and usually refuses to fight his older brother. During his fights with his brother, Carlos has learned Self-Defense so he can defend himself. Carlos will usually go out looking for his brother.

Drake is Carlos' older brother. Drake doesn't get along well with his younger brother. 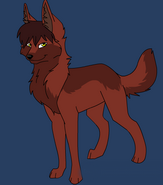 Add a photo to this gallery
Retrieved from "https://animal-oc.fandom.com/wiki/Carlos_the_Wolf?oldid=5915"
Community content is available under CC-BY-SA unless otherwise noted.