KAT3915, also known as Kat or Paws (not Paws the Wolf) is the...fursona-like-I-don't-even-know-everything-joke-derp-character of KniroAndTito3915. They are whatever gender people think that user is. Okay.

IT'S NOT ACTUALLY A FURSONA, IT'S A JOKE

KAT3915 is mostly red, with white hands and feet, snout, stomach (which goes up around their neck) and a white-tipped tail. They have black spines on their back and their tail is black. They have random turquoise hair on their head. They have pointed ears that go back and random black horns, blue eyes, and six black dots one the end of their snout (three on each side). Their nose is long and pointed. They have spines or...something one their head. Their eyes are blue, and they have two fangs at the front of their mouth and long teeth sticking out the sides. They also have four arms, and claws.

KAT doesn't make any sense. They usually go around and say weird stuff, make fun of stupid things and have weird obsessions with weird things. (Like Lippies). And SILLY STRING!!!

KAT takes out their weapons from nowhere when they want to use them. Their main weapons are: Silly String, a balloon hammer and a sword. Oh, and Jasmine the Hedgehog.

In order to hide, KAT turns into a shirt.

Valentine is a creepy pink Sonic recolour covered in hearts, and is obsessed with chasing KAT and trying to hit them with his weird Cupid bows. (Which is really scary). And don't forget, he's a pink Sonic recolour covered in hearts! Valentine actually belongs to my friend from school, but since she's trying to ship me in her lucid dreams or something, well, yeah. Wait, what? (She's the same person that made Jasmine, too)

King is one of KAT's best friends and they like to eat fries together. And...yeah

Bruce is KAT's other best friend and they like to eat choc-tops together. And...yeah

KAT's voice sounds a bit like Sonic's (but maybe slightly deeper) in any case they have that annoying tone that Sonic has.

"Yeah, I watched you a few times!"

"BACON? I'LL GET THE BACON, YOU GET THE STUFF! JUST KIDDING BUT I STILL WANT THE BACON!"

Species: I have no idea

Gender: Whatever you think the user is. It's entirely up to you I don't care

IQ: I don't know what my IQ is I'm good at math

Marital Status: NO DATES OR SPOUSES OR WHATEVER BLEH

DOB: LOOK AT MY DANG PROFILE, and no year fo you

Birth Place: Celestial Island, the one that hovers a whopping 3 feet above the ground

Residence: Celestial Island by CLOVER FALLS wait what (and lives in a hut)

Occupation: Works...at a popsicle stand, so they say LET'S BLOW THIS POPSICLE STAND!

Top Speed: Usually runs slow but can go super fast if scared or has the drive to

Abilities & Aptitude: Smart and stupid at the same time, better senses (seriously everyone is blind and deaf or something)

Weaknesses: (These do no include weaknesses already mention in Basic Stats) creepy romance stuff, echidnas, spiders, mold, tight spaces, heights, other phobias, talking in front of people, being social, you know

Personal facts
Friends: Most of their characters, the people on the SFCW, and whatever characters people want to have them be friends with I guess, and...KING THE FISHER, Bruce the Spectacled Bear (he's Australian)
Rivals: FOXY THE BLUE HEELER, DRAKE THE ECHIDNA
Enemies: Jenny the Amur Leopard, Valentine the Hedgehog, Dr. Lee Thompson, Julie-Su
Known relatives: EVIL DEMON MOM AND CREEPY ANCIENT DAD WITH A BEARD, WHICH THE DEMON MOM KILLED SO THEN KAT HAD A STEPDAD, AND HE HAD A HALF-DEMON BABBY NAMED TAK5193 (COMPLETE RIP OFF) AND THEY LEFT. Then KAT built a popsicle stand.
Likes/Favorite activities: Playing video games, drawing pictures, writing stories, watching bad movies, etc.
Dislikes/Least favorite activities: Anything involving romance (or worse hinthintXeniahinthint), skydiving, skinny dipping, parties, social things, you know
Gourmet of choice: Fruit, chocolate, salt and vinegar chips
Beverages of choice: Ice tea or lemonade
Favorite color(s): Red and green

Personality: Shy at first but really weird later. Likes to make fun of stupid things. They have a weird sense of humour. Sometimes they take things too seriously though. And they are a loner kinda. And they are INSANELY FORGETFUL. And did you know I'm on the local channel now wait what?

Physical Appearance
Color: Red, black, turquoise and white
Skin Color (i.e. muzzle, arms): Um...white?
Eye Color: Sky blue
Hair/Quill Style: The hair on top of their head is turquoise, then they have spine things coming down
Nose: Black, snout is long and pointy
Ears: Long and pointy and point back
Tail: Like a fox'sy
Other bodily features: Black horns, spines on back, four arms, fangs and teeth sticking out from the side

Attire: Sonic version wears gloves and silver shoes with Lippies buckles (sometimes the normal version wears the shoes) and also has the Demon Knux hat but usually when they are in the demon form

Vehicles: If KAT uses a car it would be a GoKart

KAT3915 WAS BORN ON THE FAR AWAY CELESTIAL ISLAND. (ACTUALLY IT'S NOT THAT FAR AWAY). THEY WERE ACTUALLY HATCHED FROM A RAINBOW YOSHI-LOOKING WOOLY FOOT EGG. THEIR MOM WAS A DEMON, AND KILLED THEIR FATHER ONE NIGHT AND SAID HE DIED FROM A HEART-ATTACK (AND SAID IT COLDLY) BY THE WAY, THEIR MOM'S NAME IS LARA AND THEIR DAD'S NAME IS LOKI. AND THEN LARA MET WICHSAHJCETUFWS (WICHSA FOR SHORT) AND THEY HAD TAK5193, THE RIP OFF OF KAT3915. AND THEN THEY ABANDONED KAT, AND KAT NEVER SAW THEM AGAIN. Then KAT built a popsicle stand and met King the Fisher and Bruce the (Australian) Spectacled Bear and they had fun teleporting into different dimensions like SANIC TEH HEGHOGGU and JOHNNY TEST. They also live in the times of the Echidnapocalypse, when echidnas are trying to take over. I don't care which kind of echidnas, ALL OF THEM ARE COMING FROM DIFFERENT WORLDS AND TRYING TO TAKE OVER KAT'S WORLD, SNORTIUS. While they all have fun having a Teen Beach Movie! And that's my Whitespot Story.

LAST CHRISTMAS I GAVE YOU MY HEART THE VERY NEXT DAY AND YOU GAVE IT AWAY THIS YEAR TO SAVE ME FROM TEARS I'LL GIVE IT TO SOMEONE SPECIAL (SPECIAL)!!!!!1111!!

EVERYTHING LOOKS BETTER IN GOLD AND GREEN!!!!1/!?!

THIS PEPPERMINT WINTER IS SO SUGAR-SWEET!!!!!11!

1.) Describe your character’s relationship with their mother or their father, or both. Was it good? Bad? Were they spoiled rotten, ignored? Do they still get along now, or no?

Answer: WELL, KAT3915 HATED THEIR EVIL DEMON MOTHER, ESPECIALLY WHEN SHE KILLED THEIR CREEPY OLD FATHER. (He had a beard, by the way). LATER KAT'S HORRID MOTHER MARRIED THAT WICHSA WHATEVER GUY, HAD A RIP-OFF CHILD, THEN ABANDONED KAT. And KAT never saw them again...

2.) What are your characters most prominent physical features?

Answer: WELL, they have four arms, and spines, and horns, and large teeth.

3.) Name one scar your character has, and tell us where it came from. If they don’t have any, is there a reason?

Answer: WHEN THEIR MOTHER SAID COLDLY THAT HER FATHER DIED OF A HEART ATTACK.

Oh wait, if a real scar than I don't know

4.) How vain is your character? Do they find themselves attractive?

Answer: No, they don't really think about that...

5.) What’s your character’s ranking on the Kinsey Scale ?

Answer: When their snorty mom FINALLY left and then KAT could build a Popsicle stand.

7.) Is there one event or happening your character would like to erase from their past? Why?

Answer: THE COLD WORDS OF THEIR MOTHER.

Answer: Ice cream: any chocolate flavours and sherbet. Colour: red and green and silver. Song: WELL, MY FAVOURITE SONG IS....JIMMY EAT WOTLD (that's not a song, it's a band) WHATEVER! FLOWER: PANSIES (MOST NOSTALGIC)

9.) Who does your character trust?

Answer: King and Bruce I guess...

10.) Can you define a turning point in your character’s life? Multiples are acceptable.

11.) Is there an animal you equate with your character?

Answer: WELL, THEY HAVE THE WOLF FORM (Jasmine the Hedgehog form) BUT REALLY, JUST A...I dunno

12.) How is your character with technology? Super savvy, or way behind the times? Letters or email?

13.) What does your character’s bed look like when he/she wakes up? Are the covers off on one side of the bed, are they all curled around a pillow, sprawled everywhere? In what position might they sleep?

Answer: MOST OF THE BLANKETS AREN'T EVEN ON THE BED

14.) How does your character react to temperature changes such as extreme heat and cold?

Answer: HATES EXTREME TEMPERATURES (although cold is better than hot)

15.) Is your character an early morning bird or a night owl?

Answer: A messed-up combination of both

Answer: No, because they're all insane

17.) What’s your character’s desk/workspace look like? Are they neat or messy?

18.) Is your character a good cook? What’s their favorite recipe, whether they’re good or not? (Microwave mac-and-cheese applies.)

Answer: CAN COOK BUT HATES IT

Answer: Walking or driving or anything that's NOT PLANES

20.) Does your character have any irrational fears?

Answer: YES, ECHIDNAS, AND SPIDERS, AND STUFF LIEK THAT

21.) What would your character’s cutie mark be?

22.) If your character could time travel, where would they go?

23.) Is your character superstitious?

Answer: STUBBY AND CALLOUSED wait what? No they are normal they have claws

27.) Pick two songs that describe your character at two different points of their life, and explain why you chose them.

Answer: DEMONS because DEMONS (never even heard that song) and THE CREATIVE HUG ME I'M SCARED SONG because LIPPIES

28.) If your character’s life was a genre, what would it be?

Answer: COMEDY, HORROR AND ADVENTURE MIXED TOGETHER (WITH A SPRINKLE OF DRAMA)

29.) How does your character smell? Do they wear perfume or cologne?

30.) And finally: Write a letter to your character, from yourself.

Answer: HI I LIKE PIE. REMEMBER TO BRUSH YOUR TEETH BEFORE GOING TO BEDDY-BYE-BYES! 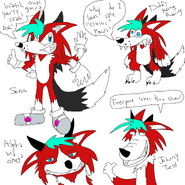 Different forms/styles
Add a photo to this gallery
Retrieved from "https://animal-oc.fandom.com/wiki/KAT3915?oldid=4278"
Community content is available under CC-BY-SA unless otherwise noted.