"Well... He's nicer once you know him more...you just have to gain his trust, I guess... To be honest, Kniro used to be nicer... But for the past four years, he's been different... I'm not quite sure what happened..."

Others fighting and violence, Lippies and anything relating to it, Jenny the Amur Leopard

Tito the Mink is a friendly fictional, anthropomorphic silver and brown mink, and the deuteragonist of the Lippies series since Lippies V.5. He is the Kniro the Amur Leopard's closest friend, who is always there to help him and others in need. However, Tito is quite naive and at times can make the wrong choices unknowingly. In Lippies V.5, Tito had the ability to use aerokinesis, however this was changed in Lippies V.6. Tito enjoys solving math questions and puzzles, and will do so for fun.

Tito was born two years after his sister Kyo. His parents were two kind minks, Jett, a pilot, and his wife Ivory. Shortly after Tito was born, both he and his sister went missing. They were taken by an evil dermatologist sheep named Dr. Lee Thompson, who had done experiments on them giving them their special abilities. Jett and Ivory searched for their children for a long time, but after a while they began to figure it was hopeless and the motor of the plane ended up breaking-down.

When Tito was about three years of age, he was abandoned by Dr. Lee Thompson in the middle of a forest. He cried, sitting on a stump for hours, until he was found by a ten-year-old lynx named Strider. Strider decided to take care of Tito as well as he could, which was hard for his age. Strider survived by stealing food from the town and eventually finding an old house which later when Tito was older, helped Strider fix up. Strider and Tito did not always get a long super well, but they learned they had to work together in order to survive. Later when Strider was fifteen and Tito was eight, they ended up meeting Kniro the Amur Leopard. Although Tito thought Kniro was weird at first, he began to realise that he was probably a good friend. Later, Tito and Kniro became best friends, and for awhile Strider, Tito and Kniro often worked together as a group.

Later however, Tito woke up in a strange hospital. Suddenly Strider came in, threatening to shoot Tito. Kniro grabbed Tito and they jumped through a window. With his aerokinesis abilities, Tito helped them get to the ground safely. After they ran back to his workshop and Strider's house, and stayed there for four years, not ever seeing Strider again within that time span.

Tito grew up with his parents, Jett and Ivory, and his sister, Kyo. His parents were close friends with Kniro's parents, therefore Tito and Kniro became close friends as well. Their lives were fairly normal until when Tito was 10, Kniro's family was attacked by THE WILSON BROTHERS!!1!111 (goddd) and luckily Kniro survived. Jett had to make him metallic limbs. OH. Then Kniro had to live with Tito's family, until one day when Jett and Ivory went out, they never returned, and due to the earlier incident, Tito, Kniro and Kyo were too afraid to go out and look for them.

Later, a crazy lynx began invading the city and causing CHAOS! Eventually he made it to Tito's house, therefore they had to escape. They ended up running into Owen the Border collie and his friend, Paws the Wolf, and managed to escape the crazy lynx together.

Tito is a kind, innocent and loyal friend who is willing to help out anyone whenever possible. He is quite out-going and loves to have fun, even if that means solving hard math questions. He has a sort of "giving is more than receiving" outlook on things. However, Tito is also very naive, and not aware of the many dangers that lurk in the areas around him. Tito's personality has been mainly the same since Lippies V.5.

In Lippies V.6, although Tito no longer has the ability to use aerokinesis, he is highly intelligent and very skilled in building things, using gadgets and such. He does bring along with him a lot of tools and items he uses when needed, however most of these are carried in Kniro's backpack.

Kniro and Tito grew up together and became inseparable friends. They always help each other out and look out for each other. The two rarely ever get into a fight, and if they do, it is usually caused by someone else trying to break their friendship, such as Jenny.

Kyo is Tito's sister, and they have a good brother-sister relationship. At times, Kyo can worry about Tito as he's quite naive and can make the wrong choice, therefore like Kniro, she feels she has to watch over him to make sure he's okay.

Relationships with Other User's Characters 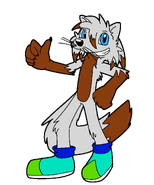 Tito as the Grey Man from LSD: Dream Emulator. It's based off something Sigma said...

Some of the first concept artwork for Lippies V.6, with Paws and Owen

Community content is available under CC-BY-SA unless otherwise noted.
Advertisement